The Urban Toybox - what is a playful space? 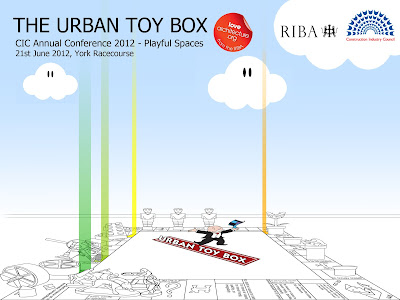 RIBA Yorkshire teamed up with Construction Industry Council to run a day of debate discussing the importance of "playful spaces" in the urban environment.

The day kicked off with journalist, musician (Hue and Cry) and cultural commentator Pat Kane who discussed that play and the spaces in which we play, are both an individual and public activity, personal and cultural, and important to the development of social environments and the everyday experiences of human lives. He used a video of a laughing baby ripping paper to show how play can assist learning. At the beginning of the 90 second clip, baby Ethan laughs so hard when he rips a piece of paper that he falls back and hits his head. He does this a few times, and then learns to laugh in a way that does not unsteady himself, so he can tear, laugh and not bang his head.

Ruwen Aluvihare, Steden Bouwer (City Builder) from Amsterdam went on to illustrate that the use of public space has evolved dramatically since the promenading parks of the Victorian era. He used examples of work in Amsterdam to show how perhaps the streetscape has replaced the park as the centre for social interraction, economic activity, recreation and play.

Dr Iain Borden, Professor of Architecture and Urban Culture at the Bartlett School of Architecture discussed his lifetime research subject and passion of skateboarding in the city. He explained that the average pedestrian only engages with the built environment on a single level, while skateboarders and free-runners reinterpret the city as a series of challenges. Where a pedestrian sees a bench, a skateboarder sees it as a platform on which to demonstrate a technical challenge. Each surface, regardless of its orientation and axis, is treated with enthusiasm and physical engagement, thereby reinterpreting the city.

Creative Director Scott Burnham, used a number of his projects from Urban Play to show how the street and public environment can be used as a canvas and encourage playful interaction. Reversing the traditional approach to urban design, in which objects and areas are created specifically to discourage public interaction and intervention, he explained that his carefully placed objects were created to encourage interaction and physical engagement by the public. He used the example of Stefan Sagmeister’s design of 350,000 euro cent coins that were placed in a square in Amsterdam to spell out "obsessions make my life worse and my work better." The project tested the public's morals, and the team fully expected for coins to be moved or stolen over night. However, the last thing they expected was for all of the coins to have disappeared by the following morning. The mystery was solved when the Amsterdam police called to say that the coins were safely stored at the police station!?! The police had totally missed the point, but were doing what they thought was right. Oh well...


Members of the audience were then invited to share their thoughts on what a playful space means to them with some very interesting results!

Thanks to Stefanie Stead and the CIC Yorkshire and Humber committee for all their hard work in putting on a great day. Thanks also to Robin Jackson from the York Architectural Association for being photographer and IT whizz for the day.